We now bring you a review of the second of two films released in the sixties entitled The Damned (read part 1 here.).

‘You must realise that today in Germany anything can happen, even the improbable…’

This line, spoken after about the first ten minutes, sets the scene for what you are about to see and hear – anything can and does happen.

The rich and respected Von Essenbeck family may have survived World War I and the subsequent depression, but now there is a new demand on their wealthy steel industry. As Hitler seeks to rebuild Germany’s infrastructure, munitions and its position in the world, the Von Essenbecks decide to do business with the Nazi party. However, the head of the family, Baron Essenbeck has no regard for national socialism. His murder early in the film is merely the start of this decadent, dysfunctional family’s scheming. Their plotting unfolds against the unmitigating political violence of 1930s Germany, such as the infamous ‘night of the long knives’.

After the patriarch’s death, who will inherit the family business? Who should inherit, who is in league with whom? What secrets and vices are the family members concealing – greed, incest, assault, murder? Who will stop at nothing to gain control of the fortune? 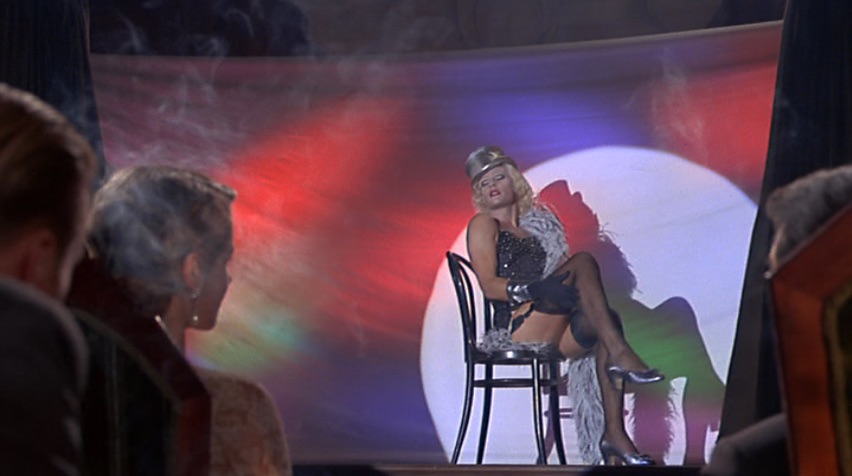 The Damned’s cast may be flawless, yet this production is not without its flaws. The international casting means languages and accents vary in the English language version, which can be irritating at times.  For example, Martin speaks with German accented English for most of the film, but sings in German when doing his impersonation of Marlene Dietrich’s Blue Angel. In addition, beware which finished print you watch. Due to censorship cuts and editing for theatrical release, there are several running times available. Aledgedly Visconti’s desired cut was over three and a half hours. Don’t settle for anything less than at least 156 minutes.

Visconti does not hold the viewer’s hand through this engrossing drama. There are many scenes that appear deliberately underlit to partially conceal mysteries that will not be answered by the plot. These shadowy sequences contrast well with the very colourful scenes of noble family banquets, sumptuous gowns and grand residences. The difference between the new Third Reich and that of the old aristocratic order, perhaps? Then there is the contrast between the family’s internecine treachery and that of the Nazis – the former is histrionic, verbal, cruel and deadly on a micro scale, whilst the latter is monstrous, barbaric and bloody beyond limits. 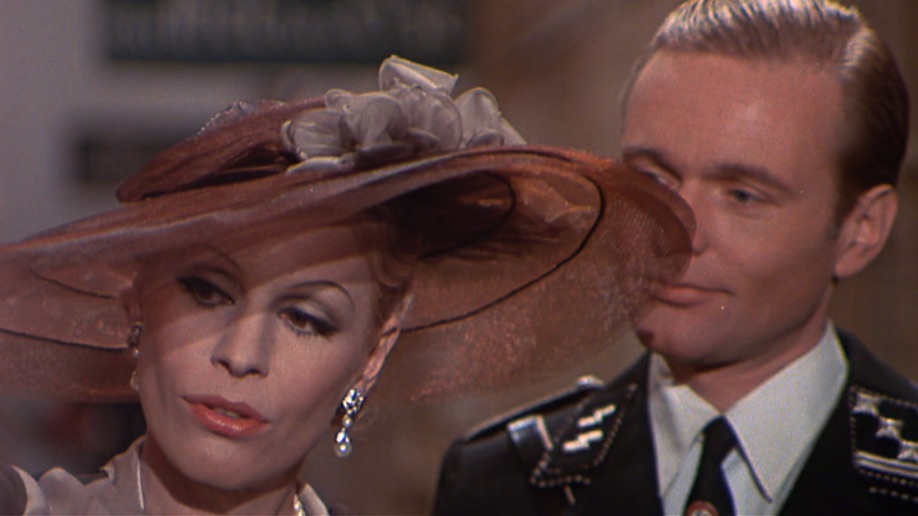 Visconti’s trademark attention to detail is very evident in this film. The colours and lighting have been chosen to reflect the plot and the status of the characters. As Professor Spool mentions, early scenes are brightly lit with bold hues. The scenes become more shadowy as the various deceits and betrayals of the family run their course. The once warm, welcoming mansion of the Von Essenbecks has its grand staircases and cavernous halls plunged into shadow- lit sparsely by a sickly green hue.

The costumes of Sophie, the manipulative baroness, show her failing influence as the film progresses. In early scenes, her appearance is polished, her hair in perfect waves. In the scene where she conspires with Aschenbach, her large brown hat completely dominates the close-up shots, almost hitting Aschenbach in the face.

Sophie’s costumes change markedly once Martin asserts his power. In the scene where Martin has sex with his mother-the low lighting and the striking vivid blue at the expense of other colours in this scene gives it a cold intensity. In her doomed wedding to Freidrich at the end, the white face make-up, coupled with a mauve hat and grey dress that conspire to leach every remaining drop of life from her features. This shows how her power has completely vanished, foreshadowing the corpse she will shortly become.

Our resident archivist Professor Spool's encyclopaedic knowledge of film and television has been amassed over many years. He studied at numerous Bootlace Cinemas across Europe, has made his own Super 8mm movies and is regarded as an authority on all things celluloid.